NOVAerial Robotics have just completed a project to build a helicopter with a gasoline engine, controlled by Arducopter (of course!)  This helicopter serves as a test bed for future gas heli development work for a client.  The goal was to prove out that it could be done as to date nobody had flown a gas powered helicopter with a Pixhawk/Ardupilot system.  Gas engines pose a unique challenge for Arducopter due to the heavy vibration they produce.  But they also present a lot of promise for UAV applications as it can allow heavy payloads, long duration flight, and high speeds. 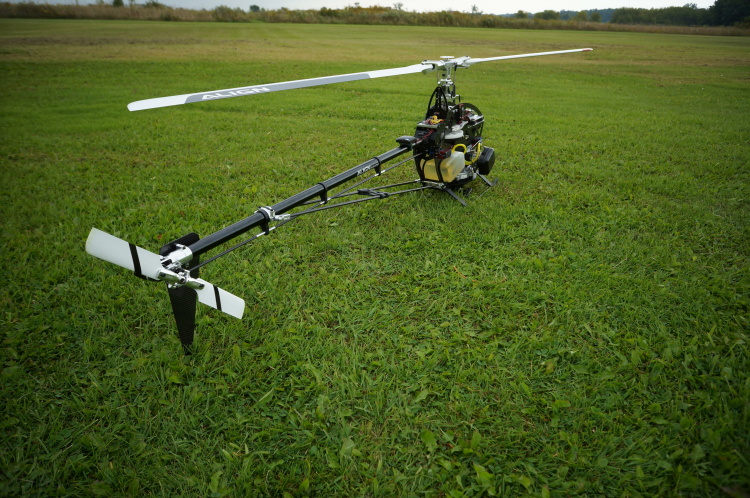 The heli is based on a Helix Heli conversion of an Align Trex 700.  However it is stretched for use with 800mm blades, and uses many upgraded components such as from KDE as well as some custom machined parts.  The machine required quite a bit of customization in order to increase frame stiffness which is important for vibration reduction.  The engine is a Zenoah G29RC engine with pull start, which is based on an industrial grade motor.  This is an increased displacement 23cc engine, which makes more power but creates more vibration than the G23.  This project could have used an aftermarket balanced engine, but NOVAerial wanted to use COTS parts and also prove the Pixhawk can survive with a worst-case engine.

The first check flights of the new machine were conducted September 19th 2010.  This is one segment of that flight where the stabilization PIDs are being tuned.

When the PID tuning was finished, it was flying very well indeed.  After increasing rotor speed to ~1600rpm and tracking in the blades, the vibrations on the Pixhawk are quite good, better than a typical quadcopter:

Afterwards test flights were conducted in Stabilize mode, and speeds of 30 m/s were reached easily. Flight time is currently better than 20 minutes with plenty of reserve on a 630cc tank.  Development will begin on a larger fuel tank system on the order of about 2L which should allow for 1 hour of flight time with payload.  Currently the 2S 4400mAH avionics battery lasts for at least an hour, but will be supplemented with an on-board generator.

Later on, tests were conducted of fully autonomous flight.  By this point, the expanded fuel system was complete with the addition of two 800cc pony tanks bringing total capacity up to 2.2L and allowing flight time up to 90 minutes.

The success of this project opens up an entirely new world of possibilities for affordable UAVs.  It will be possible to perform realistic crop spraying.  Aerial imaging with the best quality cameras available.  And extended flight ranges in a large aircraft with VTOL capability for usage in areas without a prepared landing strip.  Obviously this is not the type machine that would be used anywhere near people. But remote areas, or secured industrial lands would be suitable operational areas.