NASA is now planning on using a UAV in addition to the Rover in order to explore Mars.  The reasons are very simple, and parallel the desire to use UAV’s on earth.  Having a camera in the air, instead of being stuck on the ground, allows for better perspective to see details of the terrain.  And also, avoids the problem that rovers have with negotiating difficult terrain.

But what is particularly interesting with this story, is that they have decided to use a coaxial helicopter instead of a quadcopter.  Why?  Multirotors on earth, already have enough trouble with stabilization due to the need to accelerate and decelerate the propellers to control their flight.  While small quadcopters do fly very well, as they get bigger, and the rotors get bigger, stabilization gets harder.  This is because the rotor inertia increases exponentially with diameter.  It takes much more energy to change the speed of a large rotor than it does smaller ones.  This is why you do not see very large multirotors flying very dynamically. 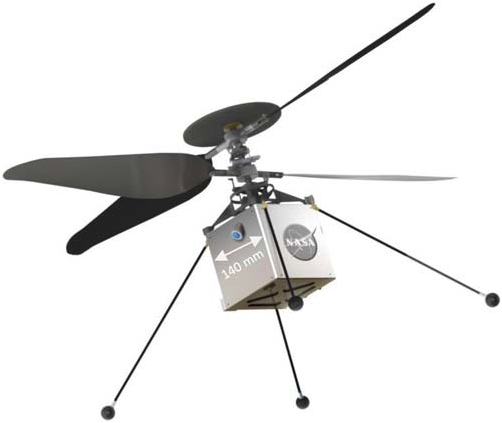 On Mars, the problem is even worse.  Due to the thin atmosphere, the rotor must be very large to be able to generate enough lift to fly. It would require a very large and heavy rotor to achieve lift, and the power required to change their speed quickly enough for flight control, would be much too large and heavy to fly.

Helicopters do not have this problem, because they use a swash plate to actuate variable pitch on each blade for flight control.  The motors do not need to be large enough to accelerate the rotors quickly for roll and pitch control.  So you can have a tiny motor spinning a large rotor in the thin Martian atmosphere.  Roll and Pitch control is achieved by cyclic pitch.  Yaw control of a coaxial helicopter is achieved via motor torque, and thrust can be controlled either by variable collective pitch on the rotors, or increasing the rotor speed.  I expect they used the former in this case, for the same reasons why fixed pitch props don’t work for pitch and roll control.  All of this also explains why large UAV helicopters fly so much better than large multirotor drones. 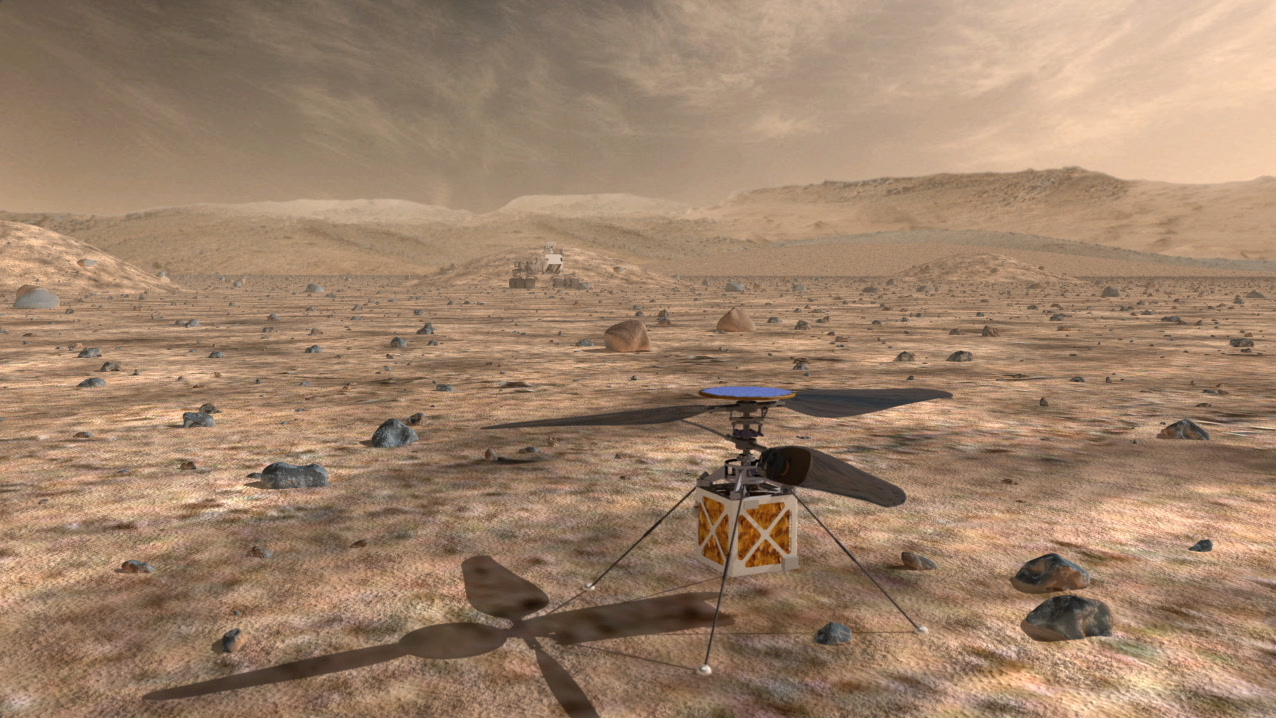 One interesting thing to point out, is that all of this also holds true for UAV’s flying at high altitudes on earth with thin air.  Multirotors will suffer much more than Helicopters will.  We have flown UAV’s in Colorado, both multirotors and helicopters.  The multirotors required installation of larger diameter propellers to achieve enough lift, in our case, changing from 10″ props to 12″. This negatively impacts the flight control, as the propellers are noticeably heavier.  The helicopter however, simply required a change to the motor controller to run the rotor slightly faster to make up for the thinner air.

We are excited to see that NASA is taking a novel approach to exploring Mars.  Here is a 37 minute video which goes into deep detail the system.

Thanks to Aerobotika for tipping us off to this story.