Now that winter has finally arrived in Canada, NOVAerial is conducting cold weather testing of the Procyon 800E helicopter drone system.  And as always, we conduct flight testing in any kind of wind condition.  As long as there is no precipitation, the Procyon is ready to do it’s job. 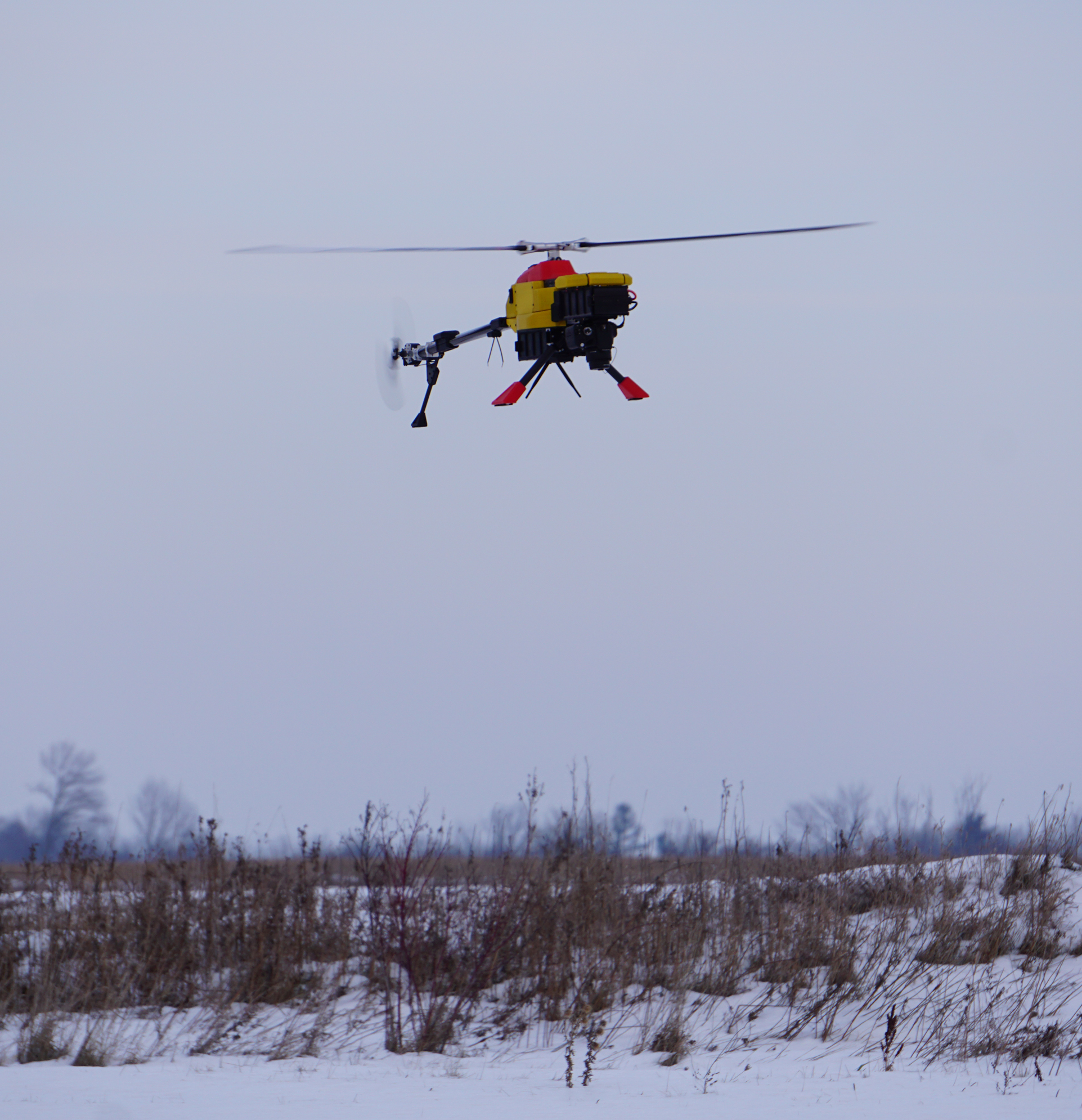 And, we shot a video to demonstrate the system capability for simple, reliable, high-speed autonomous flight including smooth cornering that Ardupilot is known for.  UAV experts around the world have long appreciated the benefits of flying with Ardupilot’s professionally developed, stable and reliable autopilot open-source software.  But not many are aware that it can also be used to fly drone helicopters.  This brings powerful and flexible mission planning to our customers.

One of the most interesting aspects of this video, is that it shows the helicopter easily flying upwind while maintaining it’s target ground speed, nearly doubling the maximum airspeed of most large high-endurance multirotor drones.

Almost all of this flight was conducted without the pilot’s hands on the control sticks.  After the motor is switched on and the automated rotor spool-up time has passed, the pilot pushes the ‘throttle’ stick (aka collective pitch for heli pilots) up to signal a takeoff. After that a mode change to Auto mode is the last input the pilot makes until after the helicopter lands and shuts down completely automatically.

This mission is using “Spline” Waypoints available exclusively with Ardupilot software.  It allows multirotors and helicopters to smoothly navigate corners without inefficient and jerky stops at each waypoint which most other autopilot systems typically feature.  However, if desired, the pilot can program standard square corners, with or without stops at each point.

This mission also demonstrates another advanced mission planning feature available to Ardupilot users:  Do-Jump.  This function allows the mission planner to repeat segments of a mission, without having to plot multiple waypoints over the same area.  Users can choose to repeat a segment once, many times, or infinitely number of times, performing a continuous loop until the pilot decides to signal the UAV to return, or the battery is depleted at which point the system will automatically return and land.  We often use this feature to fly continuous loops around our test area to perform flight testing.  In the case of this video, only a single do-jump is used to complete 2 laps, after which the helicopter drone returns to the landing area, stops, and then finishes with an RTL (Return-To-Launch).  The RTL procedure shown, is exactly the same as the system would perform should a radio-loss or other fail-safe occur.  All the way to a fully automatic touchdown within feet of it’s launch point, and safe, automatic motor-stop.